Washington state salmon managers are appealing to the Department of the Interior to set aside a 2016 opinion that has kept sport anglers from fishing the lower Skokomish for plentiful Chinook and coho for four years.

Citing research by two outside historians drawing on multiple documents, maps and statements from the late 1800s and early 1900s dug out of the National Archives and elsewhere, WDFW says that a federal Solicitor General reached “an erroneous conclusion” that the boundaries of the Skokomish Reservation stretched all the way across the river to the other bank.

The Oct. 3 letter from WDFW Director Kelly Susewind to DOI Secretary David Bernhardt says the opinion “was issued without
input by Washington State, and our subsequent analysis shows it is factually and legally deficient.”

And it requests that the matter be given immediate attention as the start of the 2020 North of Falcon salmon season negotiations is just a few months away.

“With this new information in hand, I am writing to request that Solicitor Opinion M-37034 be reversed, or at a minimum be withdrawn,” Susewind asks Bernhardt and DOI.

The Skokomish River is important because it sees one of Puget Sound’s larger returns of kings, reared at a state hatchery near Shelton, and is productive from the bank. In the starving orca era, terminal salmon fisheries will be increasingly important.

But with that opinion hanging over their heads, WDFW has had to close its seasons to keep state anglers out of legal limbo with the feds. Fishermen rallied in summer 2016 in protest. The 2017 run saw tens of thousands of Chinook in excess of broodstock needs.

And so with negotiations with the Skokomish Tribe stalled and raising the issue with the myriad Western Washington tribes at North of Falcon a nonstarter, the agency is now looking for relief from DOI.

While respective of tribal sovereignty, treaty fishing rights and historical links to the Great Bend of Hood Canal, Susewind’s letter just as firmly makes the case that at no time was the entire width of the river part of the tribe’s reservation, nor was it ever ceded to the Skokomish by the federal government before statehood.

That argument is supported by General Land Office Survey plat maps from 1861, 1873 — which in particular paid close attention to the boundaries of the reservation, according to WDFW — 1874, 1885 and 1909, along with what Susewind calls “perhaps the most significant piece of evidence on this point,” an 1874 letter discovered in the National Archives.

It was written in May of that year by federal Indian Agent Edwin Eells, who is described by Susewind as being tasked with attending to the Skokomish Tribe’s “needs,” and sent three months after President Ulysses S. Grant established the borders of the reservation via executive order.

“The present reservation lies on the North side of the river extending from the mouth about 3 1/2 miles up the river.”

According to Susewind, the correspondence from Eells to H.E.P. Smith, Commander of Indian Affairs in Washington DC, was “apparently never discovered or considered” by DOI’s Hilary C. Tompkins, who authored that 2016 opinion.

“The correspondence clears any ambiguity about whether the local federal Indian agents intended the Reservation to extend across the entire River to its south bank and encompass the River’s full width — they did not,” Susewind asserts.

As for her opinion, Tompkins argued that tribal fishers’ use of weirs “required use and control of the entire width of rivers and their beds.”

She wrote that the 1855 treaty with the tribe and Grant’s order essentially reserved the riverbed along the border of the reservation so that it did not pass to Washington at statehood under what is known as the Equal Footing Doctrine.

At statehood, navigable waters were conveyed to the states by the federal government, an act affirmed in a 1926 Supreme Court decision and essentially upheld in a 2001 ruling that there had to be clear and compelling reasons not to, both cited by Susewind. The Skokomish is considered navigable, in pioneer days to above the reservation’s western boundary.

Tompkins assessment was panned by Dr. Gail Thompson of Gail Thompson Research of Seattle, who stated Tompkins “conducted inadequate research and overlooked much information that would have led to a different conclusion.”

“To the contrary,” Thompson continues, “government maps and documents consistently show that the southern boundary of the reservation was located along the north bank of the Skokomish River.”

Dr. Douglas Littlefield of Littlefield Historical Research in California also looked into the issue, and his 111-page report concludes:

“Based upon extensive historical research in multiple archival sources, governmental reports, and historical newspaper accounts, [my] report clearly demonstrates that federal Indian Agents in Washington Territory expressly did not intend to include the bed of the Skokomish River when they established the boundaries of the Skokomish Indian Reservation. Instead, contemporaneous understanding by Indian Agents as well as other historical observers was that the Reservation’s southern boundary lay along the low-water mark of the north bank of the Skokomish River. The historical evidence in support of this conclusion is substantial and includes U.S. General Land Office survey plats and field notes as well as extensive documentation from the files of the Bureau of Indian Affairs and published annual reports of that agency.”

His “Historical Report on the Skokomish River and the Southern Boundary of the Skokomish Indian Reservation” states the border was defined by federal officials in the Office of Indian Affairs and confirmed by Grant’s order.

Littlefield’s and Thompson’s services were procured through the state Attorney General’s Office.

How this all turns out will be very interesting to watch.

Meanwhile, the work that WDFW has put into challenging the 2016 DOI Solicitor General’s opinion is notable.

The depth of the research, the tone of Susewind’s letter and who else he cc’ed it to — the state’s Congressional delegation, numerous DOI officials, the Skokomish Tribe, the Northwest Indian Fisheries Commission, and select Olympia lawmakers — lend it a confident air.

Word of it emerged publicly this morning during the Director’s Report to the Fish and Wildlife Commission.

But the question is whether the feds have enough time to review these new facts and make a decision in time for this coming North of Falcon, or when. 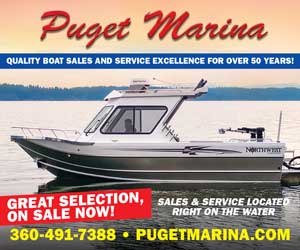 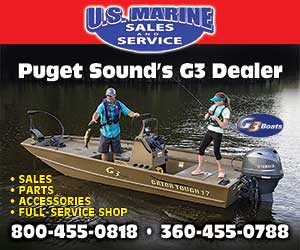